The Morin brothers collect fresh, raw milk from Ferme Louis d’Or, a neighbouring organic farm that houses 85 cows, ranging from Holstein, Jersey and Canadienne. The milk is then brought back to their creamery that once served as a Roman Catholic rectory. Here each 40 kg wheel is carefully crafted by cheesemaker, Dany Grimard, using traditional methods derived from the French Comté recipe.

After searching the city, I was able to pick up both the 12 month and the 24 month at The Village Cheesemonger in Liberty Village. The 12 month is lighter, fudge-like and tastes of roasted hazelnuts. The 24 month old is a darker golden yellow, harder, and tastes of caramelized onions and garlic with a lingering nutty persistence.

Fromagerie de Presbytére is located in the farming region of Sainte-Élizabeth-de-Warwick two hours east of Montréal. It is still a farmstead cheese and according to Jean and Dominic, it will stay that way. 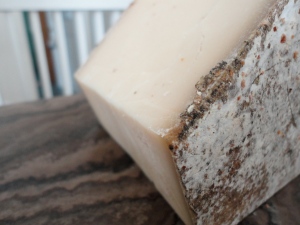